On July 21, 2020, President Donald Trump signed a Presidential Memorandum for the Secretary of Commerce ordering that "For the purpose of the reapportionment of Representatives following the 2020 census, it is the policy of the United States to exclude from the apportionment base aliens who are not in a lawful immigration status under the Immigration and Nationality Act, as amended (8 U.S.C. 1101 et seq.), to the maximum extent feasible and consistent with the discretion delegated to the executive branch."

In May of 2018, the state of Alabama filed a lawsuit against the U.S. Department of Commerce claiming that the existing practice of apportioning Congressional representation based on the total resident population rather than the total citizen population of the United States violates Section 2 of the Fourteenth Amendment, and both Article I, Section 2 and Article II, Section 1 of the Constitution.

The suit argues that the inclusion of non-citizens in the total population count will deprive the state of Alabama its rightful share of political representation, causing the state to lose a congressional seat and an electoral college vote to a state with a higher number of non-citizens.

Fair Lines America Foundation used the ACS 5-year Estimates from 2014-2018 to forecast how the Census Bureau would reapportion congressional representation based on the total citizen population rather than the total resident population. A weighted growth rate was used to calculate the 2019 and 2020 citizen population estimates.

There is currently no single publicly-available record of how many "illegal aliens" (as articulated by President Trump's memorandum) are residing in the United States. These forecasts are based upon the citizen and non-citizen population estimates produced from the American Community Survey and released by the Census Bureau. With President Trump's memorandum directing the exclusion of "illegal aliens" the apportionment base will be higher than the citizen population estimates used in this forecast.

Reapportionment Based on Citizenship 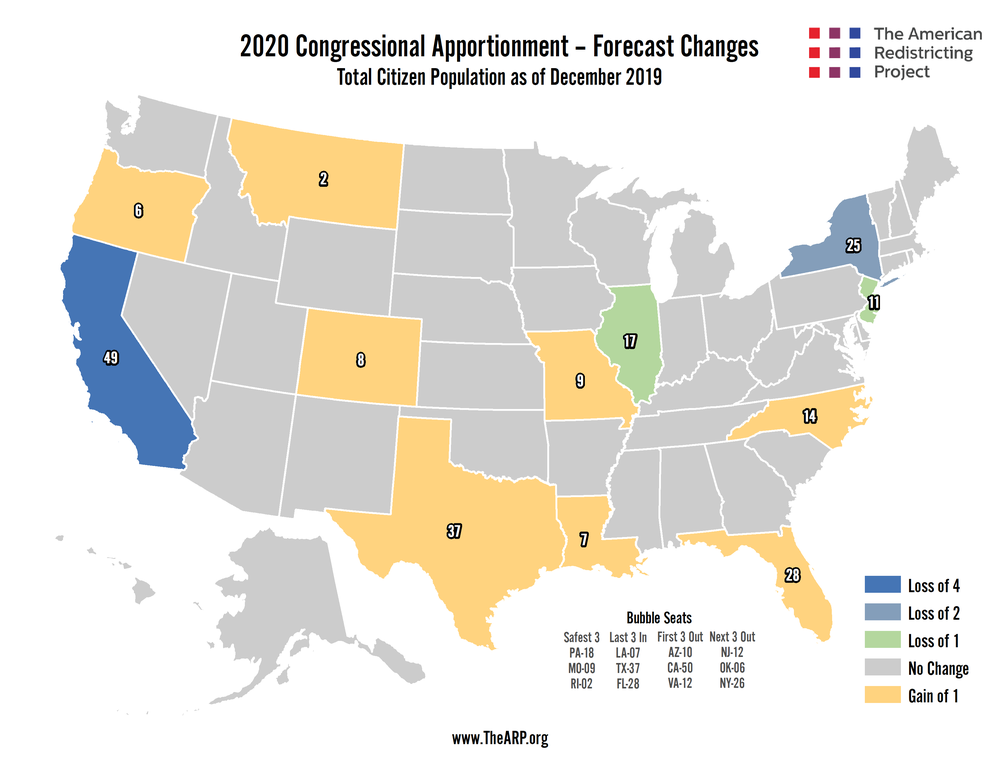 If the United States apportioned representation based on the total citizen population, California would lose four seats in the U.S. House of Representatives, New York would lose two, and New Jersey and Illinois would each lose one. Colorado, Florida, Louisiana, Missouri, Montana, North Carolina, Oregon, and Texas would gain one seat each.