In the United States, the responsibility for redistricting (the redrawing of election districts) is given to the state legislatures under Article I, Section 4 of the Constitution. After each decennial census the state legislatures convene, usually during their regular session but occasionally in special sessions, to redraw state legislative districts and Congressional districts. Some states have commissions draw their maps, but that is a somewhat recent innovation.

One of the most important questions for redistricting is “Who has control over the process?” The answer changes almost every year, but is most important in the first and second years following a census when lines are redrawn.

There are four categories a state could fall into for Congressional redistricting control:

Split Control: Redistricting is not under the full control of a united government. In these states, one major party has control over at least one part of the redistricting process but not all of it.

Commission Control: Redistricting is performed by a commission rather than through the legislative process.

At-Large: Redistricting is unnecessary because the state has one seat in Congress that is elected statewide.

After the elections in 1960, redistricting control was split between the two parties in 17 states (149 seats). Republicans controlled the redistricting process in seven states (61 seats) while Democrats had control in 21 states (220 seats). Five districts were at-large, and no commissions had yet been established. 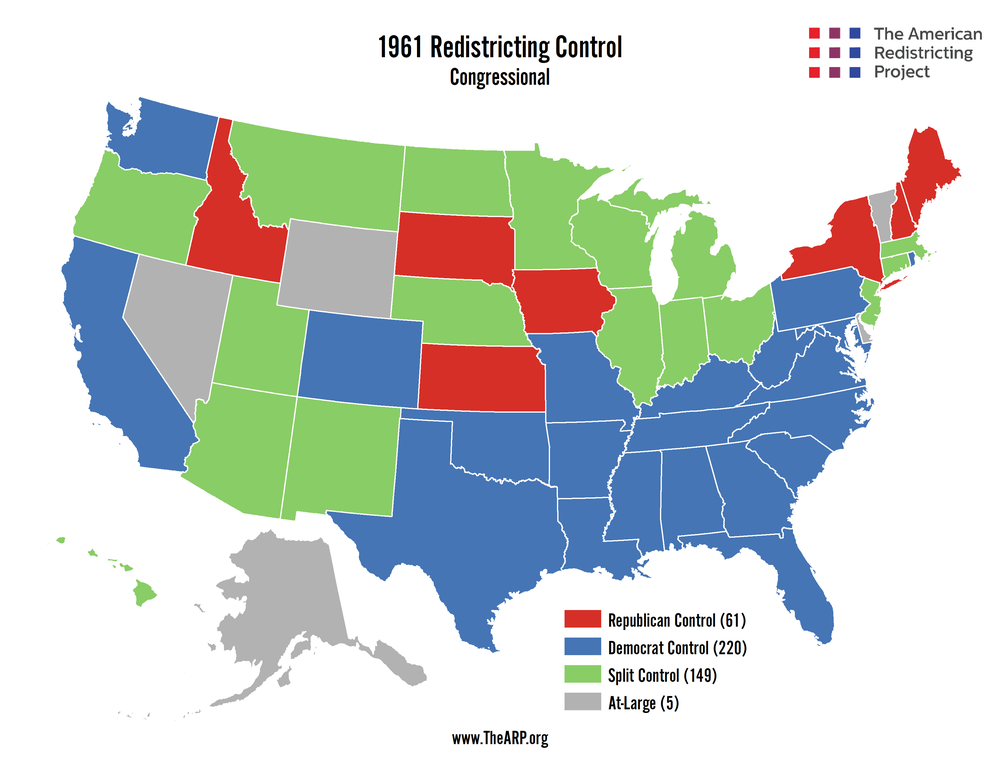 Redistricting in 1971 saw an increase in split control with both parties involved in the drawing of 217 seats (22 states). Republicans held control of redistricting in fewer states (6), but more seats (67). Democrats had the power to draw congressional districts in 16 states (with 145 seats). Commissions had still not been established for the purpose of redistricting.

Following the 1980 elections, Democrats had full control over redistricting in 16 states (164 seats), Republicans had full control in five states (50 seats), 32 states were split (213 seats), one (Hawaii – 2 seats) had a commission, and six states had only one at-large district. Democrats held the House of Representatives throughout the decade. 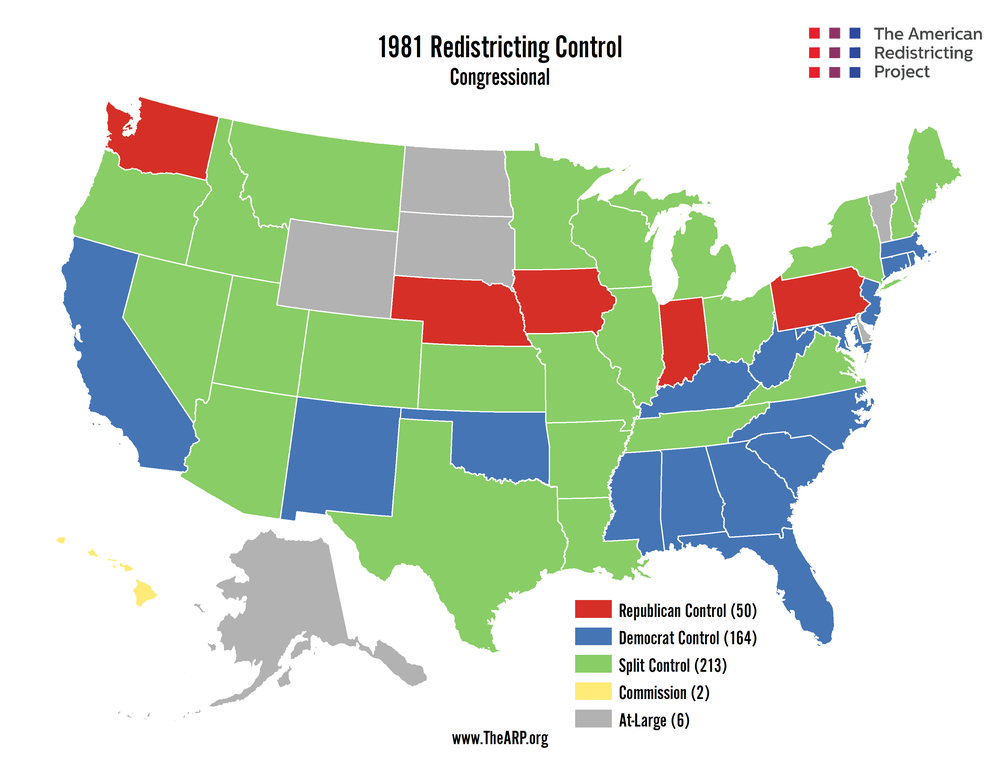 In 1991, Washington became the second state to use a commission for congressional redistricting. Montana lost a 2nd seat due to reapportionment after the 1990 Census and became the 7th at-large state. Republicans only had full control in Utah and New Hampshire (5 seats) while Democrats were able to control the process in 21 states (172 seats). More than half the districts in the country (240) were in the 28 states with split redistricting control. Democrats held the House of Representatives in 1992 but lost the House in 1994 and never regained it in the 1990s.

By 2001, three more states (Arizona, Idaho, and New Jersey) added commissions for congressional redistricting, but those five states still represented only 34 seats. Republicans secured trifectas (Governorship, Upper Chamber majority, and Lower Chamber majority) in eight states that needed to redistrict (98 seats) and Democrats held trifectas in 12 multi-seat states (135 total seats). Only 18 multi-seat states had split control, but that was still enough for a plurality of 161 seats. Reapportionment following the 2000 Census left the same seven at-large states in place. Republicans held the House in 2002 and 2004, Democrats took control in 2006 and expanded their majorities in 2008, and Republicans regained control in 2010. 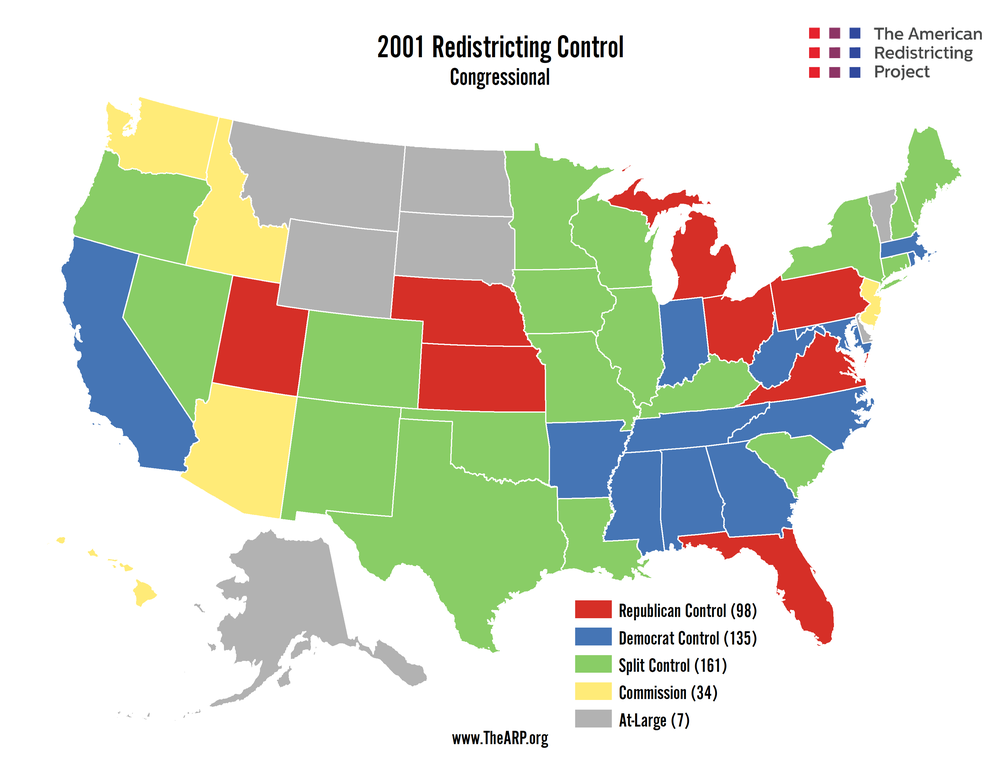 In 2011, Republicans held trifectas in 17 states (with 200 seats). Democrats only controlled 6 states (44 seats) marking a modern low for the party. Only 14 states (96 seats) were under split control. The seven at-large states remained in place for a third straight decade. California adopted a commission in the mid-2000s raising the total number of states with commissions to six and more than doubled the total number of seats under commission control to 88. Republicans held the House in 2012, 2014, and 2016. Democrats took control in 2018 and maintained it in 2020.

The number of commission states nearly doubled from the previous decade from 6 to 11 to now command 147 seats. Montana Colorado, Michigan, Virginia, and New York each created a commission for the cycle. In 2021, Republican trifectas existed in 20 states (187 seats). Democrats controlled 7 states (49 seats). Montana was apportioned a second seat for the first time since 1980, bringing the total number of at-large states down to 6. The number of states with split control shrunk drastically to 6 (46 seats). 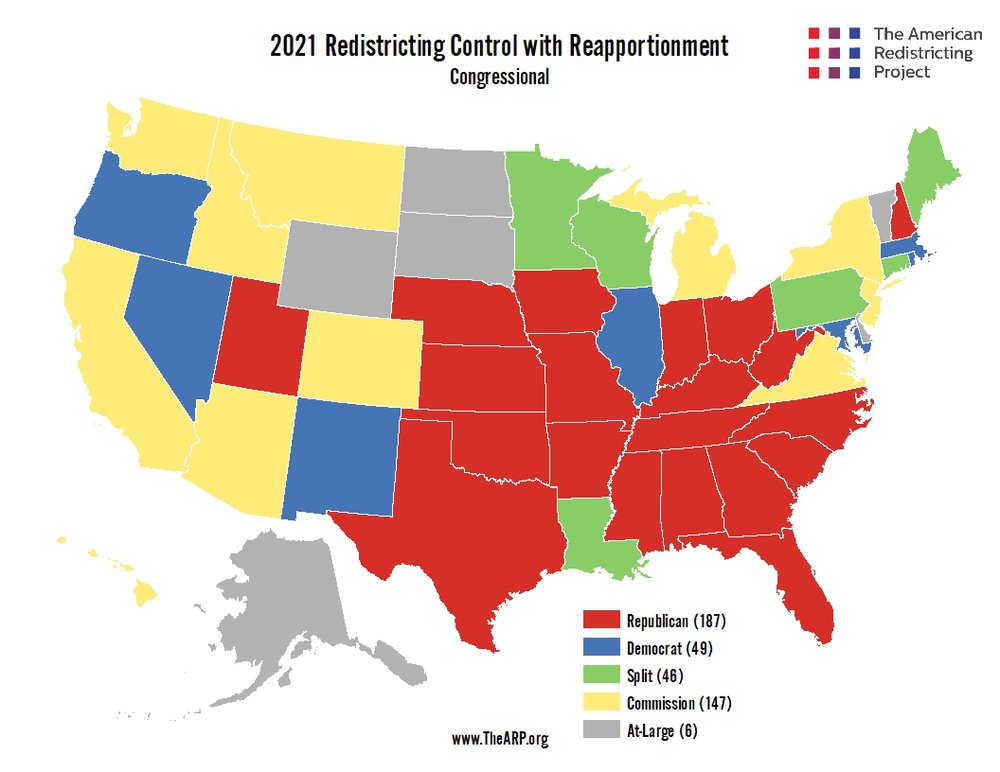